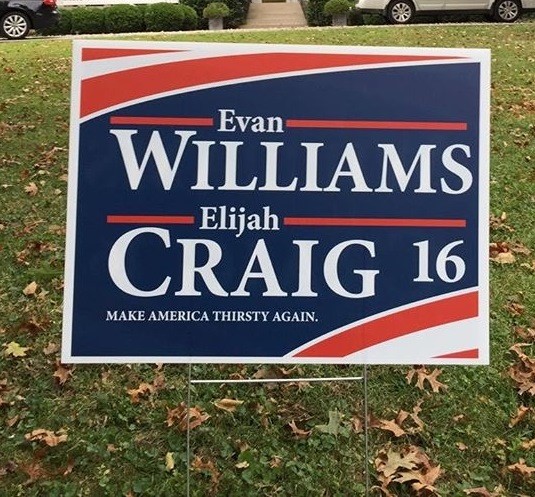 FOR RELEASE: For Immediate Release

Bardstown, KY – Evan Williams and Elijah Craig kicked off their presidential campaign today from the Bourbon Capitol of the World – Bardstown, Ky. The historical figures started the Bourbon movement campaigning on support for America’s Military, smoothness and responsibility.

“In the current political climate, Rev. Craig and I believe that America’s Future is grounded in our past. As forefathers of the American Whiskey movement, we are seriously good alternatives to the current candidates,” said Mr. Williams.

To kick off their campaign, the two candidates made yard signs available imploring people to “Make American Thirsty Again.” The signs are available at evanwilliams.com beginning today. Proceeds from the sale of the yard signs will support our American Heroes, veterans.

Mr. Williams has been a staunch advocate of veterans through his American Heroes program which supports and highlights the stories of our brave military veterans. He is also an advocate of enjoying Bourbon democratically. “Since 1783, I’ve believed that the best way to enjoy whiskey…is the way you like it.”

Rev. Craig appeals to a sense of good taste grounded in his Southern roots. Always budget conscious, the good reverend is credited with using burned barrels to store his distillate thereby starting an American Whiskey revolution.

“I would appeal to everyone’s sense of good taste and personal responsibility this evening, in particular,” said candidate Williams. “Tonight, enjoy an alternative to the incivility of the presidential campaign with me and perhaps a couple cubes of ice in front of the TV watching America’s pastime.”

The candidates request you make your vote count throughout the campaign at your local beverage retailer. Louisville-based Ashton Advertising (www.ashtonadvertising.com) is the brainchild of the Williams-Craig Campaign.

Cookies are delicious. Who doesn't love cookies? We use cookies to ensure that we give you the best experience on our website. If you continue to use this site we will assume that you are happy with it.Ok